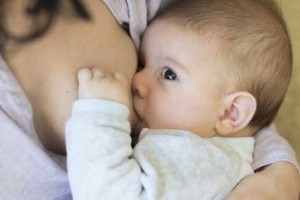 Louis is a 2 weeks old first baby. His mum Maggie brings him for his first osteopathic treatment after consulting with her doula. Louis has had problems breastfeeding since birth. It takes Maggie up to 1- 1.5 hrs to feed him. Maggie gets very tired and anxious and Louis gets frustrated, so Maggie expresses her milk and reluctantly bottle-feeds him.

Louis had a natural birth but the delivery was long as he was stuck in the birth canal. Maggie’s doula noticed that Louis was not opening his mouth wide enough and he was therefore latching onto the nipple only instead of the breast. He also prefers to take the right breast, which is now becoming painful for Maggie.

Louis turns his head only to the left side even when he is fast asleep. He doesn’t burp after each feed, has strong hiccups which appear uncomfortable and brings up milk after most of the feeds. He has difficulty passing wind and is quite unsettled in the evening.

During the first osteopathic consultation I notice that Louis holds his legs and arms very tight to his chest and doesn’t like to lie down on his back or have his head touched. His left eye is slightly closed and congested. He also sounds quite snuffly.

I gave Louis two cranial osteopathic treatments over two weeks. After the first treatment he is able to lie on his back with relaxed arms and legs. He is less unsettled in the evening, more awake and content during the day, the hiccups are milder and he is less snuffly. After the second visit, Louis turns his head to both sides even when he is asleep, he burps after most feeds and sometimes has to burp in the middle of the feed. He doesn’t bring up milk anymore.

Although Louis has responded very well to the osteopathic treatment, his feeding times are still quite prolonged and painful for Maggie. At that point I decide to refer him to a lactation consultant, as I suspect he has a tongue tie. This condition decreases the mobility of the baby’s tongue and affects the strength and effectiveness of his sucking.

After the tongue tie has been released, Louis feeds in 20 to 40 minutes and is less windy. One more osteopathic treatment and Louis is able to take both breasts equally and starts putting on weight more rapidly. Maggie feels a lot more relaxed and confident and enjoys the breastfeeding time.

We will now expand the time between osteopathic treatments but still keep regular checkups. I would like to see Louis at the main thresholds of his development which would be when he starts to: sit (around 6months), crawl (7-8 months), walk (around 1year old), during the teething phase and then for any bumps or falls.

All names have been changed to respect confidentiality.

Alexia Lescure DO. Alexia has had high success in working with expectant mothers and with babies. She also has a special interest in sports injuries, as well as most musculo-skeletal complaints. She has been working at the Brackenbury for over 2 years.